Dr Joseph von Moger was the founder of Homeopathic Centre and pioneered a unique method of Homeopathy, which he in turn passed on to his son, Anthony von Moger.

Dr Joseph von Moger gained his medical and homeopathic degrees in Europe, and had an amazing knowledge of western pharmacology, both allopathic and homeopathic, and of eastern medicines and methods, particularly Indian, Chinese and Japanese. He was fluent in French, German, Spanish, Italian, Croatian and Hungarian and could converse in various other European and Asian languages.

A member of the Liga Medicorum Homeopathic Internationalis, Joseph held various positions internationally, including Secretary for Australian members.  He had a unique method of iris diagnosis, which sped up his overall diagnosis for homeopathic treatment, which has been adopted by his son, Anthony von Moger, for use in the centre today.

Through Dr Joseph von Mogers' many years of research and development of Homeopathic remedies and diagnostic tools, patients now are benefiting from some amazing results at Homeopathic Centre. 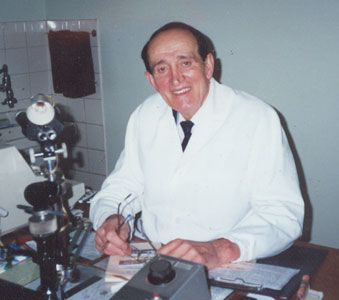