Dr Samual Hahnemann (1755 - 1843) is considered to have been the first person to formulate the laws and philosophy of Homeopathy.

Hahnemann discovered many of the core remedies used today, which were sufficient to ensure that his medicine was thoroughly established, eventually publishing his book; "The Organon," which is still considered as the bible for modern practitioners.

Originally trained as an orthodox doctor, Hahnemann became so disillusioned and appalled with the medical practices of the day, which included bloodletting, in huge, and sometimes fatal quantities, and the use of very poisonous drugs such as mercury, which caused untold damage. Such dangerous and unscientific methods persuaded Hahnemann to give up orthodox medicine. Instead he made a precarious living by writing, translating, and trying to find a more gentle and effective way of healing.

In 1791, he translated an English article on the use of Peruvian bark, from which quinine is obtained to cure Malaria. Struck by this, he started experimenting, testing small doses of the bark on himself.

He noticed that he developed palpitations, became drowsy, and that his fingers and feet became quite cold. He noted symptoms of anxiety, with chilliness and trembling, a marked thirst, and intense weakness.  There was a numb disagreeable sensation over the whole of his body.  These symptoms occurred suddenly and regularly, lasting for about 2-3 hours.

When he repeated the dose, they reoccurred.

When he stopped taking the drug, the symptoms vanished and he recovered.  Hahnemann had produced in himself the symptoms of Malaria, the very disease that Peruvian bark was supposed to cure.

The Law of Similars

Thus, he started on the long road of rediscovery that like cures like, otherwise known as the 'Law of Similars.'

Hahnemann called this process of testing substances on healthy persons a 'proving.'

It demonstrated that every remedy has imprinted in it a symptom picture. When the symptom picture that the remedy produces in a healthy person fits the characteristics of a patient, then a 'similimun' is achieved and a cure will result. By the end of his life, Hahnemann has scientifically 'proved' over 100 remedies on himself and on his colleagues.

More than 2000 remedies have now been 'proved,' although a much smaller number are commonly used in practice.  These are collected into the Materia Medica; an extremely detailed compilation of the symptoms of each remedy. 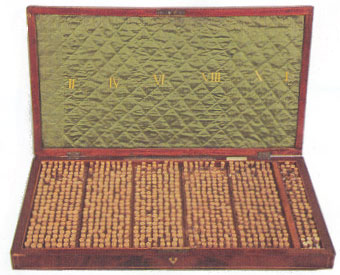 The wooden box in which Hahnemann stored his repertory of remedies, which were kept in small glass phials.

You can make an appointment in person, at the Clinic,
or simply call us or e-mail.